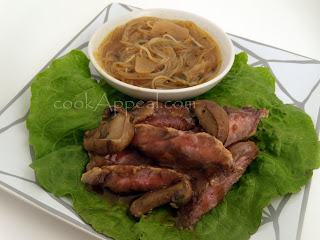 In keeping with my quest lately for learning more about Asian foods, but deciding to tackle lighter fare until I can learn more complicated recipes from a few of my books- I chose a Korean marinade, Bulgogi.

Bulgogi is made from thin slices of sirloin or other prime cuts of beef. The meat is marinated with a mixture of soy sauce, sugar, sesame oil, garlic and other ingredients such as scallions, or mushrooms, especially white button mushrooms or shiitake. Sometimes, cellophane noodles are added to the dish, which varies by region and specific recipe. Before cooking, the meat is marinated to enhance its flavor and tenderness.

Bulgogi is traditionally grilled, but pan-cooking is common as well. A practice common at Korean barbecue, whole cloves of garlic, sliced onions, and chopped green peppers are often grilled or cooked at the same time. This dish is sometimes served with a side of lettuce or other leafy vegetable, which is used to wrap a slice of cooked meat, often along with a dab of ssamjang, or other side dishes, and then eaten as a whole. 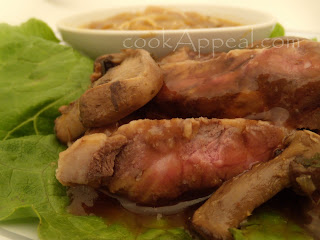 Bulgogi literally means "fire meat" in Korean (this refers to the cooking technique—over an open flame—rather than the dish's spiciness). The term is also applied to variations such as dak bulgogi (made with chicken) or dweji bulgogi (made with pork), although the seasonings are different.

Korean Marinade for my Bulgogi

Blend well in chopper. This is enough for 1 pound of meat, but then changed it up for using on chicken, or galbi marinade for the Korean BBQ meal I made.

To me this is similar in preparations for marinating flank steak for fajitas, as we all know so many of our dishes cross over in many ways in our different cultures.

Galbi- which we ate for another meal; it is quite different from beef bulgogi because the marinade is not soy sauce-based, but instead consists of gochujang and/or chili powder, garlic, sesame oil, onions, and ground Asian pear. This is also unsuitable for cooking over a grill, and is thus cooked in a pan.

I made spicy mirin soaked onions and broth, and added bean thread noodles for my banchan (side dishes), which is typical to serve side dishes (many) in the Korean meal.When my children were around six and seven we were invited to eat with my Korean friend Sue, and they took us to (my first experience ever) an area around Walnut Hill Lane off I-95 in Dallas, where rows and rows of Koren restaurants sit. They ordered the food, and I had no idea what it all was. Apparently it was the banchan, bowls and bowls of tasty things. My son, the adventuresome eater like me, well he had never ate anything outside of 'normal' American food, he tore into that food, and my friends sat their staring at him laughing, but they were impressed. I knew I had a good eater on my hands!

Information and photo below from Wikipedia under Korean  BBQ, Bulgogi- 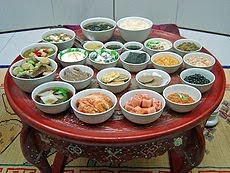