Does the idea of eating traditional New York style delicatessen food rock your boat, but finding one in the Princeton area, or even in New Jersey period disappointing? You either have to head towards Philly, down south, or up to north Jersey, and face it, not many 'real' style deli's are left in New York either. Having eaten at a few in the city, I can see the appeal.

Gary and Lenny’s New York Delicatessen off Route 1 south is not quite over the top like its New York counterparts, but it does offers up breakfast to dinner with the appeal of large portions and reasonable prices. Diners will be glad to know this eatery is offering an extensive menu that reads like ‘Scrapple to Apples’ with Jewish specialties, including smoked fish combos along a column of Reuben’s and more. 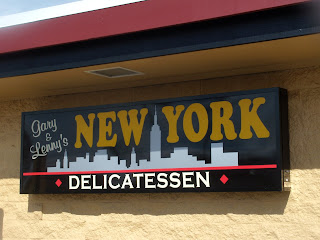 Feels like being in New York without having to park, wait, and taking the train in. If you chose to drive, then the long traffic wait, and then high parking fees. No pickle bar though, but quick forgiveness with their pickle (half-sour and two full-sour pickles), kraut, and tomato plate quickly served up so you can nibble while waiting for your meal, and they bring plenty upon request. There are at least five soup choices, which is a draw for many light eaters, as well as the great vegetarian choices.

The wait staff was more than friendly/willing to give you samples of soup, or meats if you were unsure or might have forgotten how great the corned beef might be. The vegetarian mushroom barley soup was a plus, as well as a few other soup tasted. The pickle sampler was not disappointing, as the sample of chopped liver that was graciously brought upon request. When the pastrami/brisket sandwiches arrived, they screamed ‘large’, but no one at the table had any problems finishing the overstuffed bread.

Now if you are adventuresome the menu does offer a few ‘unusual’ deli choices that seem to remind one of a diner, which Jersey is well known for, such as the pastrami/corn beef/provolone stuffed twice baked potatoes. A great choice for gluten free eaters, and a delight from the regular ones found on chain menus, this dish was quite tasty, and quite a large order, so more than half were taken to go.

One highlight is their selection of Junior's cheesecakes, which got quite a few diners excited. Large slices of cakes are available and let’s just say if you were a carrot cake fan, well you will not be disappointed, and all large enough for the table to share, or take home for later.

Service was a bit off once the dining room began to fill up, but this is common in working out the kinks of a new location. There are plans for more visits to get more of this real deal delicatessen experience without having to travel to NYC.

This was also a chance to catch up with a neighbor blog who I adore, Figtree Appetizers (left) and my friend Gen (who knows her NYC Jewish deli's) for a new eatery experience. Often we have spoke of meeting for lunch one day, but found the weather over the past six months to be non-cooperative. We chose Gary and Lenny's and enjoyed a leisurely lunch together discussing our cooking class likes and dislikes (she teaches as well). The conversation flowed like the amounts of food we shared! 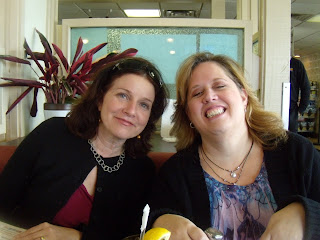 I am sure we will be meeting here, and at the Trenton Farmers Market for some more food experiences, but all three of us seem busy these days, so I only can hope to have that much fun again...