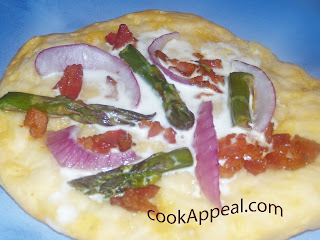 Mindy @ Mindy's Mouthful and I decided to do a little ping pong recipe challenge. She picks German dishes, and I pick French dishes. Some we have made, but most we have not. You are welcome to join in. Email her, or me your dish link, and the two of us will post them along with ours. You are also welcome to mention us if you like.

Last week we did 'Rustic French Meatloaf', and this week we are doing 'Tarte flambée' (French), or as she called it 'Flammkuchen' (German). Mindy does live on the border of Germany and France, and that must be exciting for her. I might have to go visit and try the real thing!

When you hop on over to Wikipedia you will see that the photo for Flammkuchen/Tarte flambée is pizza, a white one at that! Speaking of which Reeni @ Cinnamon, Spice & Everything Nice does not realize it, but she too made a version of this I saw on Sunday, Tomato, Onion, White Pizza, and like they say if we could lick the screen to enjoy it as much as looking; then we would have it made!

Legend says that the creators of this dish were those Alsatian farmers who used to bake bread once a week. A tarte flambée would be used to test the heat of their wood fired ovens. At the peak of its temperature, the oven would also have the ideal conditions in which to bake a tarte flambée. The embers would be pushed aside to make room for the tarte in the middle of the oven, and the intense heat would be able to bake it in 1 or 2 minutes. The crust that forms the border of the tarte flambée would be nearly burned by the flames.The name itself comes from this method of baking, the English translation of the original Alsatian name meaning "baked in the flames". 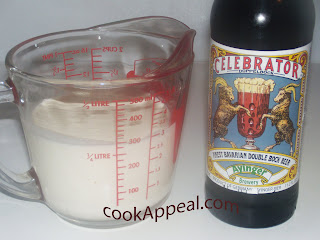 'I admit the beer worked better with the flammkuchen at meal time than in the crust, but it tasted great'!

The key ingredients to making this dish are only four ingredients- one is making the crust; which I made a gluten-free version like I have before, but this time used a splash of Bavarian beer to the dough ; Crème fraîche, onion, and bacon (oh how I love this ingredient). Hubby gave me a look when he saw how bare his mini's were, so I steamed some asparagus and added tips for the flat ones, and the other pieces stuffed inside the flammkuchen calzone/pockets.

I made my own Crème fraîche this round. This is very easy to make, and will keep well in the refrigerator. However make it the night before as I have done in the past, so it can sit out; otherwise if it is not at least 70 degrees in your kitchen the bacteria will not cooperate for you.

Crème fraîche can be made at home by adding a small amount of cultured buttermilk (2 tablespoons) or sour cream to normal heavy cream (1 pint), and allowing it to stand for several hours until the bacterial cultures act on the cream. Mindy is right this dough is not as easy. Mine still puffed up a bit more than it should have. Also, my pizza stone finely bit the dust recently. Happens when you drop it when cleaning the oven.

Can I say totally spudalicious? Our first entry this week is- Aoife (aka The Daily Spud) submitted a might tasty looking The (Almost) Über Tuber version of this dish. I love the name, and called first dibs on the leftovers!

Then you have to go and check out Mindy's tasty Flammkuchen. I think hers came out perfectly! I love thin crust pizza, so I know I might be eating this as often as I could if I took a trip to her area...

That pizza stone would have made it look and cook crispier like hers!

Next Monday's Mouthful is 'Champignons de Paris'- Champignons- refers to dishes made with mushrooms or served with a mushroom sauce, and is French for mushroom. Unfortunately Wikipedia does not recognize the actual dish; only gives you the definition of mushrooms. I felt this would leave it wide open for a variety of dishes for us to make... I have chosen to make a savory version I call 'Crepe Suzette Champignon'...
Posted by Chef E at Monday, April 27, 2009