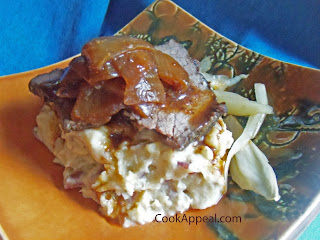 Another craving I have had lately is mashed potatoes. So instead of just eating a big plate of them, I decided to make a few other things to compliment them.

Moroccan and BBQ is something I decided would mingle well along with some smoked onion mustard I made. After reading Sippity Sups mustard posts this past week, I thought I would give it a shot. I have made a Chinese Cinnamon BBQ sauce before, and decided on a similar idea with an added twist of mustard with oven baked short ribs. Roasting potatoes, along with a few other vegetables makes for a good potato salad smash and side! 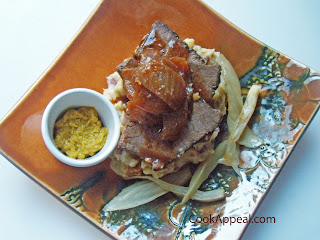 I smoked the onions the night before the night before...alright'y, did that make sense? Blend equal parts onion/mustard in a small food processor and set aside (thick consistency).

Assemble a mixing cup of-

Marinade the ribs in this solution for up to two hours in refrigerator, or overnight.

Place 6-8 large/fat short ribs in baking dish and spread mustard over the meat portion. Reduce the marinade by 1/3 and pour onto bottom of baking dish gently not to disturb mustard. Bake 300 degrees for 2 1/2 hours on bottom rack. Do not over cook. You want meat to remain in tact for slicing.

In a baking pan place small whole red bliss potatoes, onions, and quartered celery root; drizzle with olive oil, garlic, paprika, salt/pepper to taste; place on the top rack uncovered for about 45 minutes; until fork tender. Once the vegetables are cool seal them in a container, and place in fridge over night. You will use them for mash potato recipe below. 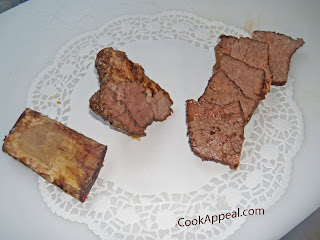 The next day when meat is still chilled, remove solidified fat from ribs and sauce. Holding the muscle area where the bone was removed begin slicing meat and getting as close as you can to the tough part. Remove the remaining edible pieces of meat, and returned it to a pan. Heat sauce and bits on a slow simmer; cook down the sauce by half, and lay whole slices on top to cook for at least 15 minutes covered allowing to steam a bit more.

Roasted Celery Root Mash Potatoes- Smash half of the potatoes; place the other half and ingredients in food processor. Blend together with 1/2 cup hot cream, 1/4 hot vegetable broth (use sparingly), 1 garlic clove, salt/pepper to taste, and 3 tablespoons butter; blend until desired consistency. Mix smash and puree together and stir till well blended. 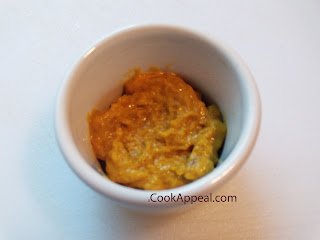 I have given this recipe out to only one other person, but if anyone wants it just email me!