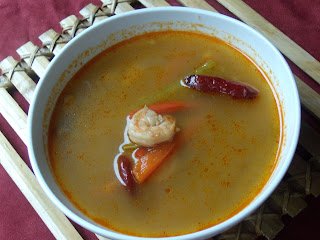 Most of us have heard that when you do not feel well, a good bowl of chicken soup will help build back up your immune system. I am hungry, but not yet feeling up to an outing to the grocery store. Only having a little of this and that in the cupboard and fridge I decided to look around for some soup ideas. My gluten-free eating limits the noodle options, but finally I saw 'hot and sour' mentioned in one of my global cuisine books listed under Thai was Tom Yum Soup. Having most of the ingredients, I decided this was what I was making. 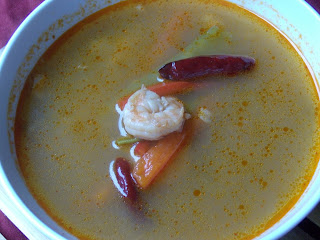 I had a few frozen scrap chicken breast pieces and some peeled shrimp. Most all the seasonings are in my cupboard; just not the mushrooms and the fish sauce. I would make a stir fried rice for hubby's more filling supper, and incorporate my kitchen time to a minimal. Being tired these last three days gave me a good reason to pull a chair into the kitchen to work at the counter. Hey! At least I made a tasty meal; otherwise I must confess we have eaten cereal with rice milk for our meals. 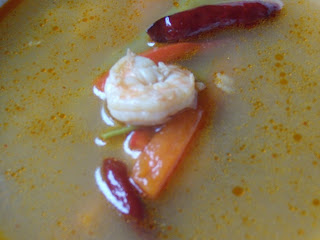 'I always felt soups like this were too time consuming, but you can add cucumbers, straw mushrooms, carrots, and most anything to this hot and sour combo so quickly. I just really wanted a broth that would open up my sinuses, so that I can breath better!'

Bring some chicken stock to the boil over medium heat in a saucepan. Add 1 tablespoon of lemongrass (a tube they now sell at the market), kaffir lime leaves, grated ginger, and chilies in a pan over high heat with some oil for 3 or so minutes to open flavor; then add to the broth. Lower the heat to medium low, cover, and simmer for 15 minutes to let the spices infuse the broth.

I stir fried some small pieces of chicken, green and red peppers, and onion in a few table spoons of oil on medium high in the original seasoning pan; cook until chicken is done.Toss in the shrimp and cook for about 8 minutes until they turn pink. Remove from the heat and add half of the juice from a lime, green onions, and cilantro. Make brown rice and quickly on high heat toss the two together.

Then add the other half of lime in my broth, and I removed the kaffir lime leaves and chilies, and tossed them to the side; added some shrimp, chicken, peppers and peas to the soup mixture and enjoy! That wore me out, and back to the couch for some more rest I go... 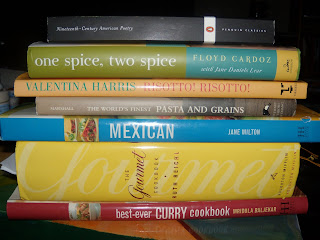 Hubby brought me 'his choice' of books to keep me company while he works late and weekends in the past weeks. The top book is a new poetry book given to me as a gift, so that was the top and winner read of my time on the couch; along with a hot bowl of *slurp* Tom Yum Yum Yum!