- To be saved by Gordon Ramsey, or bulldozed?

People who live in the town of White House Station wonder what is up with this restaurant name I discovered while asking questions around town the other morning. Watching some past episodes of 'Ramsey's Kitchen Nightmares'; that I actually get Gordon Ramsey. Working in an unorganized back of the house nightmare, and with owners who have no clue how to run their business is not fun! He will surely change the name... 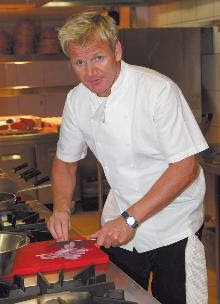 While I was snooping around my friends quaint little town this past Tuesday looking for Gordo (as someone called him in a comment); I discovered this restaurant has had three owners; is right next to a noisy train station; the owner got her hair done once by Robert C., and the filming crew was already two days behind.

Okay, so far they are just beginning to get the place ready for Gordon's arrival. The back lot was set up with tents, and a trailer, but I did not see his name. Believe me guys I was on my toes. I tried to be sneaky take photos inconspicuously, but did not see him on the property. Next thing I knew they were stapling black plastic over the windows, and I wondered if it was to keep people like me out of there way? "Nah" said Dennis, a producer friend explained; it was for the camera lights they would be using to film the show.


While waiting for Robert to arrive, and over at the train station I saw three people sitting and watching the restaurant's back door. Good idea! So I joined them, and we talked about the whole thing. Was he nice? Was he as tall as he looks on cable? Will we hear him stomp outside and say the 'F' word as the owner feels over powered by his ideas? Could he really help a cursed ginormous restaurant with a menu as long as a novel? An all over the place eatery that was not well thought out. The other side was a hideous car garage and lot...location, location, location!


I had lots of fun while I was visiting my friend, and there are updates coming from Robert C./Salon Opus owner. The latest news was that the film crew was set up taking shots of the outside, and the neighborhood. He walked over to see if he could get information for us, but said they quickly broke down the film tracks, and had moved back in. Salon Opus clients are waiting with foil full of highlights while he is peeping across the street for me. I was not disappointed since I had a fun day, and I am still determined to go back over there to get my photos of Gordo...


'You can see them stapling the black plastic over the windows...'
Posted by Chef E at Wednesday, May 13, 2009