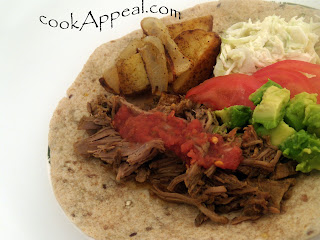 The “brisket taco” was popularized in the 1980s in many Texas Tex-Mex restaurants such as Mia's and Micocina of Dallas; Matt's El Rancho and Serrano's of Austin. They can either be coated in a dry rub mixture as I have done, or slow smoked over pecan as Matt's El Rancho in Austin, Texas does. This dish is still popular in my house, as was in my childhood home.


Brisket can be cooked many ways. Popular methods in the Southern United States include rubbing with a spice rub or marinating the meat, then cooking slowly over indirect heat from charcoal or wood. This is a form of smoking the meat. Additional basting of the meat is often done during the cooking process. However, most of the tenderness from this normally tougher cut of meat comes from the fat cap often left attached to the brisket. The brisket is almost always placed with the fat on top so that it slowly dissolves down into the meat as it cooks, resulting in a more juicy and tender meat.

Once I moved to New Jersey I found this meat did not come as cheaply as it did in Texas. Also, learning that the Jewish community cooks this cut of meat like one would tougher cuts such as roast, but in an almost flavorless manner; I decided to introduce my tasty homegrown version of making BBQ and tacos to my clients and friends in the area, and today still fill many orders for them.

The “taco” is a Mexican sandwich that dates in English to around 1900, and is comprised of a rolled or folded, pliable maize tortilla filled with an edible substance. According to the Real Academia Española, the word taco originally meant (and still means) a plug (as in rolled paper used plug a hole) or paper or cloth patch for musket balls. Care should be taken when using the word taco outside of Mexico, as the RAE lists 27 possible meanings for the word. A taco is normally served flat on a tortilla that has been warmed up on a comal; since the tortilla is still soft, it can be folded over or pinched together into a U-shape for convenient consumption.

First, there was maize; then, there were tortillas- The tortilla origins began in the Central American region as early as 3600 B.C., and spread to other areas like Mexico; were they are still made and eaten with almost all meals today, but originally they were considered an appetizer by the Spanish name of antojito. This also referred to in many Tex-Mex books and sites as 'The Mexican Sandwich'. Many other uses for the tortilla came about through fusion of Spanish/Mexican, and Anglo cuisines as history tells us. 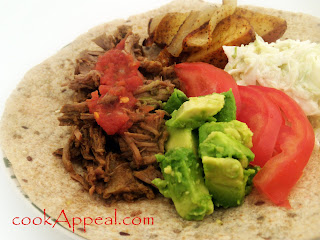 I grew up with this cut of meat being slow braised. My mom would wake up as early as four in the morning, season it with liquid smoke, cumin, garlic, chili powder, salt and pepper; you would go nuts smelling it when you rose from bed as you anticipated how it would be served. Brisket was an inexpensive cut of meat, and could be found in many stores year round in Texas, and still is. Summer months you might see it as cheap as eighty nine cents a pound. Often my father would slather it in sauce and finish it off on the grill for his favorite BBQ sandwich, but now and then my mom would place this fall apart juicy meat in homemade masa tortillas for an easy taco weekend meal. She would make coleslaw, red beans, pico di gallo, and throw it all on the tortilla together. I am not a picky eater, so if it all ran together, the better! Many people I meet that tries my dish tells me stories about how they or someone they know had it in Texas once and considers it a tasty dish.

I remember a neighbor taught my mom about cumin, masa, and other seasonings for making ground beef tacos when I was a young girl in the 1960's, she began rubbing the same seasonings on brisket as an alternative to just liquid smoke, salt, and pepper. I have continued the tradition for both dishes since. My guess is that the neighbor was of Anglo Mexican and New Mexico Indian heritage, as I learned later on that traditional residents of Mexico I befriended did not like cumin, or its association with Mexican cuisine.

Cumin unlike chili powder was introduced around the time when slaves, and colonist were recruited by Spain to come to the San Antonio area in the 1800's. The Canary Islanders of Africa were responsible for its use in dishes such as tagine cuisine. Infusion of these different seasonings, ingredients, and techniques resulted in the Tex-Mex cuisine; therefore creating one of the southern regions oldest cuisines. Old and new dishes are continuously being recreated in Texas kitchens.