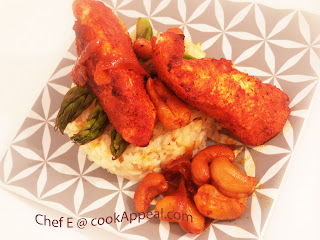 Happy Cinco de Mayo! Happy 5th of May...well this is what we had to celebrate on the 5th, and what I made at my personal chef job! Missing- is the green salad with cilantro cream dressing, but the asparagus are peeping through. We opted to go out, but they changed the local Tex-Mex restaurant to an American theme place. Dee @ Texas To Mexico explains that this holiday is hardly recognized all over the country of Mexico she has resided for two years. In her 'Whats All The Hoopla' post she goes on to explain what the real celebration is all about, so go over and read her beautiful site!

Cinco de Mayo commemorates the Mexican army's unlikely victory over French forces at the Battle of Puebla on May 5, 1862, under the leadership of Mexican General Ignacio Zaragoza Seguín. They had not been defeated in fifty years! 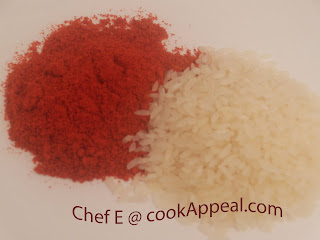 Now over at Girliechef there is a 'Chili' celebration, and anyone can submit their recipe along with photos. She has all the rules posted, as mine is already stretched to my max!

My love for chilies, and all things spicy began around the fourth grade. I am almost 48, so you do the math... My father worked with Mexican immigrants in the HAVAC field in the early 70's, and at lunch time they would take him to some hole in the wall authentic Mexican restaurants in Dallas. Not only was the food reasonably priced, but the food had a kick and flavors he had not tasted before. See my father was a home grown Texan, meat and potatoes boy! He told me that he had seen this huge jar of green peppers sitting on the counter, and wanted to try one; they obliged warning him they were pickled and hot! One bite of that pepper and he was hooked (I am my fathers daughter). I have to try every shape or form I find in the market, and have most recently begun to smoke my own.

*[1]Chilies, Capsicum annuum or C. frutescens, Family Name: Solanaceae- Chili is the most popular spice and throughout history, wherever it was, chili transformed the preciously bland cuisine. Latin American, Asain, African, Caribbean and certain regional Oriental cuisines make extensive use of this spice. The name chili is believed to dirived from an ancient Indian word- txile. Chilies are native to Mexico.

Why I like them- Chilies have a chemical effect on our bodies which some of us enjoy more than others. Once you have got over the stage where the slightest hint of chili makes you cry (or sweat) and sputter, you may find that the flavor becomes pleasurable and even addictive. They are rich in Vitiman C, they stimulate the appetite and cool down the body; especially in hot climates, by stimulating our eccrine and apocrine glands. So, it makes sense that workers of Mexico would have eaten these fruit with their meals, either whole or ground to combat the hot sun in the southern region of Central America. Chilies are also part of our night shade plants, and grow very easily in the garden. My father shared they go well with a cold cerveza! 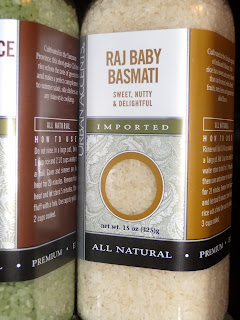 'Remember the trio of 'Rice' that had been given as a gift to me?'

I will have to say out of all the 'Rice' reviews that I have written since March, this was the best! The Raj Baby Basmati smell was so fragrant that even after reheating; it just kept reaching up and calling me to make more dishes. So, once again I made rice pudding, since I had made so much of the basmati*[2](a different recipe); then I made a tandoor/tiki style BBQ cashew chicken.

Raj Baby Basmati Rice, Urban Accents- Cultivated in the Punjab region of India and Pakistan, this rice has a sweet and nutty flavor, and imported from India.

Much of the basmati rice is cultivated in the northern Punjab regions and along the Pakistan borders. Traditionally the grains of basmati rice are longer than non-basmati varieties, but a few are sold in ethnic markets around the world. Cooked grains of Basmati rice are characteristically free flowing rather than sticky. Cooked basmati rice can be uniquely identified by its fragrance. Basmati rice is available in two varieties - white rice and brown rice.

A basmati grain is shaped like a sword and post cooking each grain elongates at least twice that of its original size. The rich aroma is another way by which one can recognize basmati rice.

Many time’s people have asked what the meaning of basmati rice is. Basmati rice has been reported in India since the early days of the 19th Century; though it may have been named differently. 'Bas' in Hindi language means "aroma" and 'Mati' mean’s "full of" hence the word Basmati i.e. full of aroma. 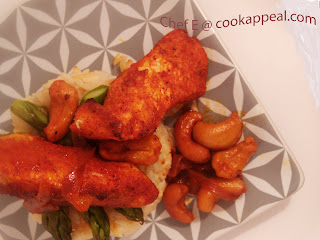 Tandoor ovens were originally small mud plastered resembling today's Tandoor with a side door have been found in Harappa and Mohenjodero settlements of ancient Indus valley. Tandoor originated in Persia (Iran) and brought to India via Afghanistan by Arabs. Evidence also exists that Tandoor may have been native to India dating back to 3000 BC.

Most of the restaurants in United States use natural gas fired Tandoor, there is no oopla woodchips or charcoal. For home use you can use gas fired grills.

Tandoori spices, and Tikka spices are the seasonings for Indian grilled and barbecued meats. Traditionally tandoori spices are made up of ginger, garlic, cumin, coriander and other aromatic spices such as deep red chili powders; which give it the beautiful red color and a kick. Traditionally they are added along yogurt, and then meats marinade in them for hours.

Traditionally this Asian Indian Tandoor BBQ is served over a bed of fried red onions, and eaten with Naan bread that is also cooked in the hot ovens. Instead I made basmati rice, and asparagus; along with a mixed green salad and tomatillo-cilantro cream dressing. Starting with a base of oil, rub (Ground guajillo, cayenne, bird's eye chilies, from my sisters garden- cumin, ground coriander seeds, garlic, salt/pepper ), red onions- I warm the oil and let the ingredients meld; then rub on the chicken pieces, and sit over night. Once fully marinated over night in fridge, I grilled it, cooked the sauce separately, and threw the cashews as an extra nutty flavor; then tossed it all together in the pan. This chicken rub packed the heat, but the flavor comes through. 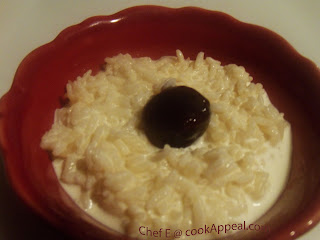 'I could hardly keep hubby out of this dish all weekend! He decided he likes any version I have made...'

*[2]Easy Rice Pudding- Cook the basmati as per package instructions, and it will be very fluffy; set aside. Heat up a half cup heavy cream (you may substitute soy or rice milk) and stir in 3 tablespoons powder sugar (all the sugar I had in the house); mix well. Pour over a cup of rice in separate bowl, and let it sit in fridge for half an hour. I have topped hubby's with a plum butter we bought in a Farmers Market last summer. The fragrance of the rice melded well with the cream and sugar, and really you did not need much else (traditionally Rice Pudding has eggs to solidify the mixture; this was a quick way to use up my excess rice).