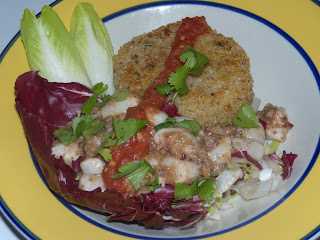 Experimenting with salads can be daunting when you get bored with foods so quickly. This might sound more like a summer thing, but I eat this stuff throughout the year...

The menu was already thought out...bay scallops, cod, and a spicy lime marinade Ceviche with Shitake Quinoa Cakes. A local organic market, Whole Earth had some beautiful radicchio di verona (is actually Chicory- looks like a small head of red lettuce) and endives (Belgian White Gold) to compliment this dish. Neither need a dressing with the lime marinade of the cheviche spooned on top.

Both have a crunch with a tangy and bitter flavor that complimented the sweet, savory and spiciness of the other two in the bowl, and I love my homemade salsa on the quinoa...sometimes that is my lunch along with a small salad!

Cook the quinoa according to directions...but, let it over cook till it is just mushy enough to stick together. Add some oil or butter, finely chopped shitakes (my lil chopper), garlic powder, cumin, chili powder, salt and pepper to taste...set it aside to cool a bit.

Take a round mold (mine came from William Sanoma) and rub oil inside. Heat up a few drops of oil in skillet or non-stick pan, and press quinoa down into to it and pull up to release. I could have made mine a little shorter, the stack almost collapsed, but brown on both sides then plate with desired ingredients.

There are so many recipes out there, and I change mine often. I took cilantro, garlic, cumin, chili powder, salt and pepper, red onion, and lime juice in my 'lil chopper and made a puree. I soaked the fish and scallops in lemon water to begin the cooking process (citrus cooks fish); then drained it after an hour of being in refrigerator and poured my blended mixture over them and then plate.