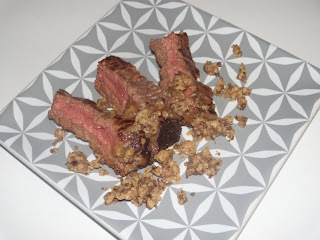 Sitting down to begin work on the computer I noticed a food critic was interviewing a chef in NYC on the New York Times section of my window, so I clicked on and listened while working...

Steak marinated in mulled wine- as legend has it this is originally from the turn of the century in Italy when the Barbarians raided the northern regions, 49 AD. Making use of the horse meat laying around, or somehow preserve it in the Amarone region.

The chef being interviewed recommended using clove and cinnamon along with the wine and citrus to marinade the meat, and the cooking should be quick and hot, in a heavy pan, for just about two minutes per side; you might generate a bit of smoke but the cooking time is short enough that it will be tolerable...here is the version I decided on after research of ingredients and others who tried his method...

-Warm the wine up slightly on the stove in a sauce pan remove from heat and then add steaks. Three hours to overnight in refrigeration. Steaks should be 1/2 inch cut or more, stuffed, flank steak, and game meats like rabbit, venison, lamb, etc...

Heat up heavy pan, such as cast iron (will smoke so turn on vent). Cook for three minutes on each side, and should be eaten medium rare. *frown* If person over cooks to a charcoal state!

I have topped it off with a sprinkle of Compound Mushroom Butter that compliments the red wine and balsamic flavor of the marinade! 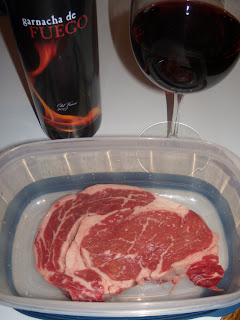 What kind of wine should you use to marinate...well not a cheap one in my opinion (or make it full bodied), so go with an Amarone (Italian)...I went with a 2007 Tempernillo from Spain! Let the other half bottle breath just before you cook your steak and then consume the wine with your dinner. Oh, and do not forget to make your self a plate of vegetable...Man cannot live on steak along (bad cliche but it works)!

I served up my newly created (next post) Dried Cherry Wine Zucchini Salad...