Peel or Peal- Time for reading... 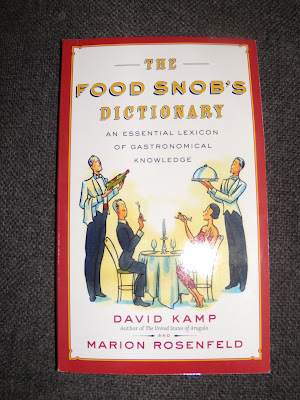 A blog friend Buff brought up a question...is it Pizza Peel or Pizza Peal...in reference to my Pizza stone I use to give my thin crust and other pastries a nice *crunch*...well I had to look that one up, but had already was catching up on some reading in this small, but funny handbook that David Kamp has published before I received his email...

Sit back and put your feet up...Once this humble chef worked in a world of food snobbery that was full of more habbery blabbery than she really wanted...but she learned many things while away on that planet...fois gras terrines, nice tall puffy souffles, foam tricks, the perfect creamy risottos, emulsions, dayboat, degustation, and on...after returning back to her simple kitchen she found it useful to share knowledge with others (if they asked, no forcing here)...but otherwise it can be worth a good laugh when you think about it...it is all good back on the Snobbery Planet...and as they say you can take the girl out of the country, but you cannot take the country out of the girl!

Oh, and Buff- I learn something everyday...thank god for google...it is 'Peal', but there is no official ruling except the Italians say 'Peal' and they would know...somebody like me with my twang accent, well, it would sound like 'Peel'...kind of like when I say 'deck' my friends say it sounds like 'dick'... 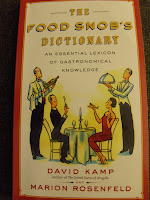 David Kamp has written some pretty good books like United States of Arugula, and he keeps the regular folk informed on the whole 'foodie' culture...

Still...I am troubled by the lore of Brady-as-glutton, and not for any moral reason. I simply have a hard time believing that he ate as much as he is said to have eaten.
Posted by Chef E at Friday, January 02, 2009