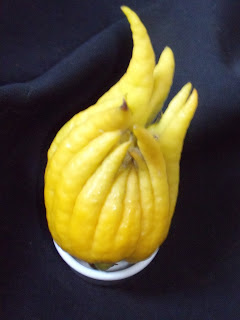 This citron variety is known as the Budda's hand Citron, Buddha's hand, or Fingered Citron. Being one of the oldest citrus fruits and is more commonly known as the fingered citron, and has a lemony perfume and is used to flavor liqueurs, vermouth, and for medicinal purposes.

A frequent private cooking lesson client, (and friends) who just got married a year ago decides she wants me to teach her how to make a few new recipes in the kitchen, so she can show off when they entertain. She really likes Indian food so I took her on some market tours the day before and we decided on Bhindi, Naan, Perfect Basmati, and she really likes my orange scones I make for her gatherings. We were both so facinated over this fruit that I decided I would teach her how to make everything she wanted but the scones. Marmalade replaced the scones until another day, because it is time consuming and needed to cool. I decided to infuse it with a few extra ingredients and make it our own...but, where do you start? What if it gives me the finger.......... 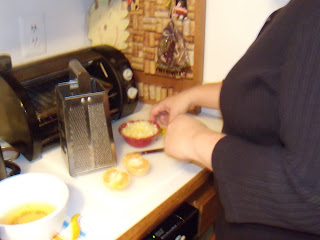 I had her cut the citrus into quarters and soak in warm water for a half hour to soften and bring out more of its flavor. Pat dry and grate the whole thing on the largest grater, my is student so graciously preparing this for our lesson. 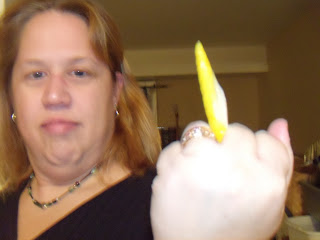 Well, I did get the finger because I have her doing a lot of prep for her other cooking instructions.

Additional Info: The hand has been used in China and Japan for perfuming rooms and clothing and has been used as an ornament, as well as in religious ceremonies. The peel is processed in brine and pressed to extract citron oil, used to flavor liqueurs and to scent cosmetics.It is also cultivated for its fragrant rind, which is used to flavor dishes, is candied or is turned into marmalade.

Buddha's Hands are available in large supermarkets in the winter months. They will keep for about two weeks at room temperature. The flesh is not juicy. They grow on a small bush like the one below- 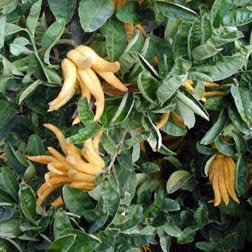 NOTE: In the past I have surfed for interesting sites and found this one, so I book marked it. It is a very detailed instruction on various ways to make marmalade and other similar recipes. When I receive emails asking a question regarding this I send them this site. As a chef I am impressed at this persons site for those of you who might need more visual...go check them out- 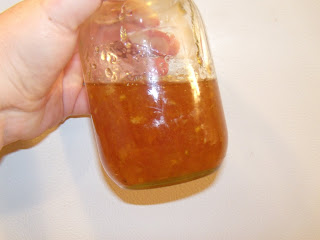 RECIPE: Here is our jar, about a cup or over, out of one small grated Budda's Hand, one clemintine orange juiced, 1/4 cup lemon juice, 2 cups water and 1 1/2 cup organic pure cane sugar, boil until reduces, thickens when cool. Next blog...recipes using this (very sweet)and intense citrus marmalade.
Posted by Chef E at Wednesday, November 12, 2008