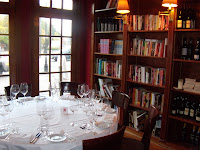 A couple of hicks went to New Brunswick to see 'The Toxic Avenger', a play off George Street; when they turned the corner just short of the theater they saw a sign that read 'Stage Left'. The two turned around and went back home!

Oh... that was the joke of the day..but dinner and theater can be fun, and this experience was no joke. Stage Left has been calling out to us for years since we moved here. A consulting job with an Indian fusion restaurant brought me there on many occasions, but otherwise it just did not seem the right time.

A wonderful friend here in NJ called us up and said she had two extra tickets to see 'Toxic Avenger'. I had never even heard of this NJ cult classic funny, nor seen the movie. We dressed up and made dinner reservations, and off the two hicks went (really only one of us is) to have our own fun night of 'Treak or Treats'.

Stage Left was as we had always hoped...a great experience, and the play kept us laughing and rocking (Jon Bon Jovi's key boardist, David Bryan, co-wrote the score and was in the audience), and gave NJ a pummeling. Appetites tonight were a little on the lite side, so ordereding two appetizers instead of a heavy entree course was a good decision on this chef's part. My husbands entree, Fall Vegetable Stuffed Minature Pumpkins was on the entree side of the menu, but more on the lite side of eating. Wonderful raisin pecan and sourdough rolls were offered in the beginning and this was a good filler for the both of us. All was rich and delicious!

I took pictures of our food, so just let that speak for itself; otherwise I give this experience a good rating! Our jokes...well...I won't quit my day job! 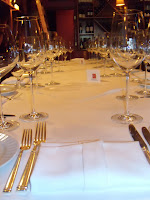 I am waiting to be invited to the big table!

They offer an actual cellar room that I took a peak at, but the 'Library' was just as cozy. The menu also holds a seven course tasting menu called 'Grand Degustation', and also a 'Petite Menu' at very reasonable prices. They hold a full bar and a large wine listing as well. Stage Left ~ $$$-$$$$ 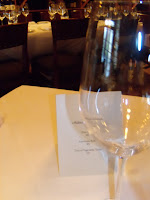 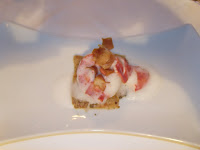 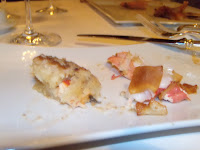 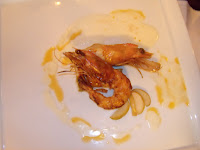 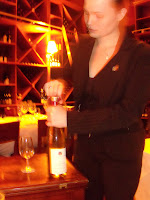 After many years of hearing about 'Corked' wines, and maybe opening up a few of our own over the past twelve years; we finally got to find out exactly what it smelled like...after opening our bottle of wine (see more info below) the sommelier said it was corked and would retrieve another bottle...yes folks, it smelled like old wet cardboard. Have you ever walked down in the flooded basement, or into your grandparents old garage and smelled this funky wet, not quite mildew, smell? 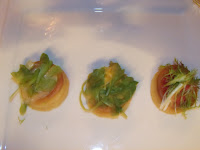 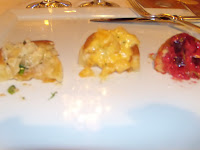 A better view of the fillings...apples...butternut squash...beets with goat cheese 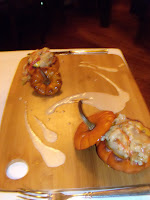 Pumpkins filled with Israeli Couscous, and a mix of vegetables 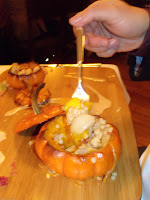 Some of my photos came out with an odd flashy light swirling around, maybe the Toxic Avenger was working his green powers on my camera...

Discussing the atmosphere of our 'dining room', in the 'Library' of Stage Left, my husband so kindly commented on my photos that included the movable ladder (not pictured in this post due to possible real vertigo from the swirling lights), and noted that there were no wine faeries to be found...thus, leading us into the discussion of wouldn't it be an interesting restaurant if they had the wine cellar below, but with a stone lined hole in the center of the floor. There would be a pole with small steps spiraling down into that marvelous place. Wine faeries coming in and out, but when the sommeliers were ready to retire; they would slowly descend into the pit of 'heaven' and later only a few empty bottles would remain.

WINE: Selbach-Oster, 2004 Weissburgunder, Spatlese Trocken...the sommelier described this white wine as 'burgundy' like with strong floral hints. A wine made from Pinot Blanc grapes. This wine went well with our courses, and is hard to describe the morning after, but we would purchase it again.
Posted by Chef E at Sunday, November 02, 2008