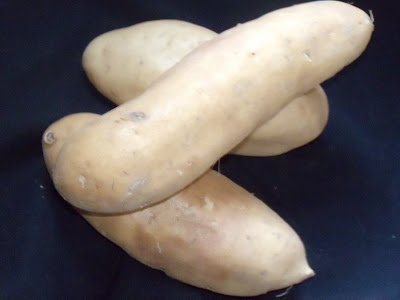 I found these white yams at the organic market the other day and have been trying to decide what to do with them. Another 'Peanut Butter Boy' challenge? Roast them with various ingredients, or perhaps just baked them for my self since my husband is traveling the whole week and I do not cook much just for myself?

While I was in VA, waiting for my high maintenance girlfriend to get ready I was watching a local channel cooking show and a french chef made 'Potato Stew' in a way that I had never seen. He took the potatoes and sliced them as if to make a gratin, but then sliced onion, leeks, carrots and cubed three kinds of meat. First he put the potatoes on the bottom of a huge soup like dish, then the other ingredients, and once again topped it off with the potatoes. Once full to the rim he poured not one bottle but two bottles of white wine on top and sealed the lid with bread. He baked it for several hours and then served it up like a regular stew.

After investigating I discovered this dish is traditionaly cooked in a 'Marmita' pot, and referenced Basque and Provence areas for its origins.

I was intrigued, but since I have pondered over this long enough, I have decided to put my own twist on this dish using my 'White Yams' to create a similar dish in the Tagine. I have cooked a few French dishes in my day, and loved Julia Child, but this is going to be a French infused Berber dish tonight. Oh, and only one bottle of wine, the other is mine!
Posted by Chef E at Tuesday, November 18, 2008