Ethiopia- The Cradle of Civilization 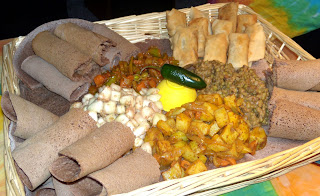 'This trip to Ethiopia had a more diverse range of flavor all around the platter...'

Last Sunday we all took a trip to Ethiopia that included a lentil, meat, vegetable, and chicken course along with the traditional bread of injera (100% teff flour). Hubby and I enjoyed the meal and a movie on our last voyage, but this trip to the 'horn' region of Africa we are taking along a few other passengers... 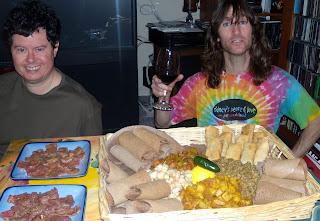 'Company sat around the coffee table and drank wine while my Open Mic friend, Dennis (right) entertained us with his guitar...I told him he had to work for food'!


This week's menu involves a few 'out of the ordinary' recipes I made in the restaurant years ago, and a few things of 'my own' creative side of eating. If you read the history below, like us influences of different cultures reached the area, and that includes their love of 'heat' in many of the dishes. The injera this trip is a blend of brown rice flour (2/3) and teff (1/3) blended with distilled water and let sit with a starter or yeast packet for a few days. Also, Joie de Vivre @ An Amateur Gourmets Guide is not feeling well, so let's give her a big shout out to get well, so she can make the trip next time 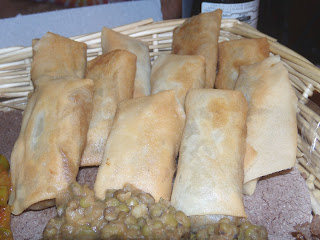 'Samosa look more like lumpia's since I ran out of time to properly wrap them...as most know Indian samosa are triangle shaped'

Rinse the lentils under running water in a sieve. Then drop them into boiling water—enough to cover by 2 inches, and simmer the lentils for 30 minutes, or until tender, and only adding more water if needed.

Combine the vinegar, oil, salt, and black pepper, and mix well. Add the lentils and add equal amount of the chili potatoes. Place egg roll wrapper in folded hand and make a cone, adding a heaping tablespoon of mixture into the wrapper, wipe with egg wash, and seal. Drop in oil and cook until golden brown. Serve with berbere (Ethiopian hot sauce).

This was one of our popular appetizers at Red Sea. The addition of the vinegar and potatoes, along with the berbere make it a unique take on the Indian Samosa. I also saved some lentils for eating with the injera, and the vinegar gives it a sour taste, but still nice and different contrast with the rest of the dishes. 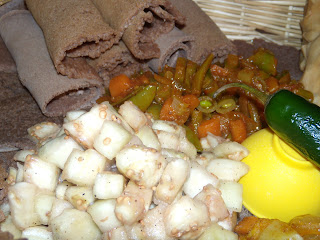 'Eggplant (below) and vegetable berbere is just above'

Place the diced eggplant in a bowl. Mix the salt and lemon juice together and pour over the eggplants. Let sit for 30 minutes.

Sprinkle on the oil and toss well. Gently stir in the garlic and beans. Season with black pepper. 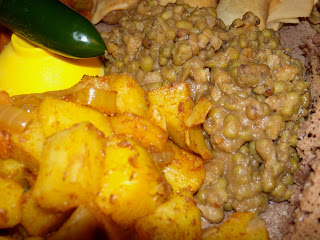 Heat oil in pan and add onions, when begins to appear tender add seasonings and remove from heat. Add tomato paste and toss in potatoes; cover and let meld. 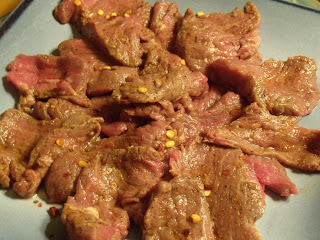 'Raw meat (grass feed fillet here) is one of the countries dishes...Kifto, tartare steak marinated in lemon, oil, hot pepper, and paprika...'
HISTORY: If you read about the country or remember the focus has been more commonly associated with political theme and drought. Gastronomy had never crossed my mind until I ate at my first Ethiopian restaurant... As with its cuisine remaining pure and untouched for centuries, landlocked Ethiopia lies somewhat separate from Mother Africa. To the north is Eritrea, which has been in an on-again, off-again war with Ethiopia since gaining its independence from the larger country in 1991.

Ethiopia's other borders include Kenya, Somalia, and Sudan and can be easily drawn along an encircling rim of high mountain peaks—some of them reaching over 15,000 feet. Transportation is difficult in this terrain, which is why Ethiopia has maintained its purity—relatively uninfluenced by neighboring countries and their invasions over the centuries.

Since the 1400's, traders have introduced some non-indigenous ingredients that have added to what we now know of as authentic Ethiopian cuisine. From Portugal came chile peppers, and from the Orient—ginger. India played a part in North African trade as well, introducing exotic spices. However, gastronomic influences are not altogether obvious in Ethiopian cuisine because it is so different from all others.

Almost half of Ethiopia's population are Christians, who live in Northern Ethiopia. In the south Muslim factions predominate. Vegetarian dishes are not only a must for the Muslims, but are also popular among Ethiopia's Christian population, who respect nearly 200 fasting days a year (chicken, meat, and dairy products are not allowed). 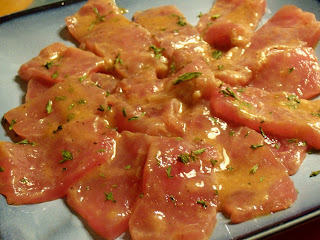