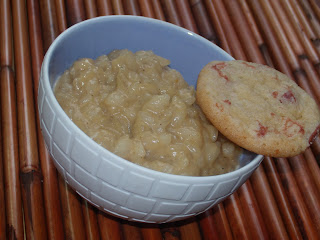 This is my 'Sweet Rice' post addition to my 'Lets Talk Rice' series this past week. I chose to make an Ume-boshi sugar cookie that has a sweet and salty flavor combined; along with a jasmine rice pudding flavored with only coconut milk and brown sugar. They both were a success, and went well together. 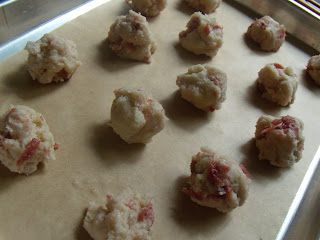 Ume-boshi is tricky to use in dishes other than intended uses as in salads and other Asian dishes like Marc @ No Recipes salad post. I ask him if he thought it would work in a rice pudding and he said it was extremely salty, so instead I chose the sugar cookie to be my guinea pig. Hubby loves rice pudding and I wanted to surprise him with his favorite dessert, but also a little extra- extra something... Now if my mom had only made it this way, I might have liked it better as a child! 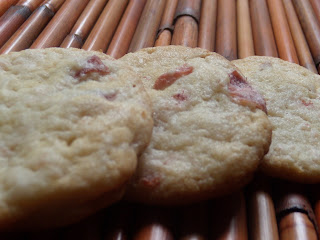 Lets now talk about Jasmine rice , sometimes known as Thai fragrant rice, is a long-grain variety of rice that has a nutty aroma and a subtle and pandan-like (Pandanus amaryllifolius-leaves) flavor (caused by 2-acetyl-1-pyrroline). Jasmine rice is originally from Thailand. It was discovered as the Kao Horm Mali- 105 variety (KDML105) by Sunthorn Seehanern, an official of the ministry of agriculture in the Chachoengsao Province of Thailand in 1954. The grains will cling when cooked, though it is less sticky than other rices as it has less amylopectin.

I have found that Jasmine rice is often used in cooking Thai food around the world, and some say it has less aromatic properties than Basmati (Indian) , but that is a personal preference. In Indian cooking, spices are added to both kinds to enhance its flavor, but Jasmine really works well for sweet recipes like my rice pudding. The length and slenderness of the grains suggest that they should remain separate on cooking but it differs from other long grain rices in that it has a soft and slightly sticky texture when cooked.

I have not even begun to talk about the information I have found showing in the United States, and how there are knock off brands, so be careful when you are specifically looking for Jasmine. If you want an original version then learn the facts and shop at Asian markets for your ingredients as I do. You will be overwhelmed by the endless piles and bags stacked up high on wooden palates, but you will not be disappointed. I did however find a small package of 'medium' jasmine grain. Wanting to see how this would cook up in my pudding play, I picked up a package. 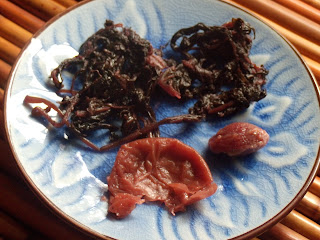 'Here is the pickled Ume (Asian Plum) and it is pickled with beefsteak tomato leaves, and the seed is almost as big as the little plum...' 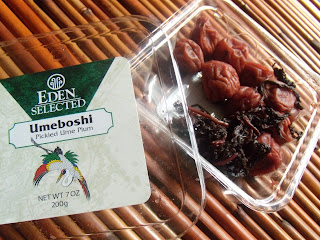 For those who don't know what UME-BOSHI is:

Ume-boshi (梅干, pickled Ume) are a type of Japanese pickle. They are a traditional food which is popular in Japan. Their natural color is brown, but Umeboshi are often dyed red using an herb called akajiso (often supplemented with artificial red coloring in commercially available Ume-boshi). Ume-boshi may be round, and vary from unwrinkled to very wrinkled. Their taste is very sour and salty. Ume-boshi are made by drying Ume fruits and then packing them in barrels with salt. A weight is placed on top and the fruits gradually exude all remaining juices, which accumulate at the bottom of the barrel.

Ume-boshi are usually eaten with rice. As part of a bento (Japanese lunch box), a single Ume-boshi (with pit removed) is often placed in the center of the rice, resulting in what looks like the flag of Japan. It is also a common ingredient in Onigiri, rice balls wrapped in nori. Among Japanese, Ume-boshi are believed to be good for health, and may be eaten as a folk remedy for the cold. Because of their high salt content, they can be kept for a very long time without spoiling. 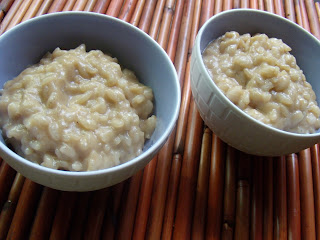 'One for me, one for hubby, and there is one for Tangle...cause I hear she loves rice...'

The next post will be my third and final trip to Ethiopia along with Joie de virve @ An Amatuer Gourmets Guide...she has already left the gate, but I will be there shortly...go see what she has made...
Posted by Chef E at Wednesday, March 25, 2009