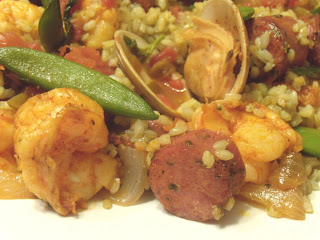 'Paella is a painstaking dish, but well worth the effort'!

Yunnan is situated in a mountainous area, with high elevations in the northwest and low elevations in the southeast. Most of the population lives in the eastern part of the province. In the west, the relative height from mountain peaks to river valleys can be as much as 3,000 meters. Yunnan is rich in natural resources and has the largest diversity of plant life in China. Rice remains the top agricultural product for the country, and all of Asia.

Looking to find specific information on foods and flavors of the Yunnan area like specific spices, I learned that they are popular for their noodle stands, eat vegetation such as bamboo that are indigenous to the area, as well as common place ingredients available in China. Recipes and food preparation varies greatly from province to province. (more below) 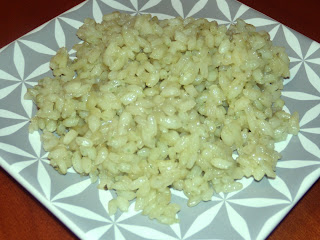 'The Yunnan Palace Bamboo rice has a subtle flavor of green tea on its own, great texture, and kept its color to where you saw the contrast (I might have put to much chili paste on shrimp, and it came out a bit red looking on the final plating...)'

As I talk about more depth in my 'Lets Talk Rice' post; it is often regarded as a poor man's meal even in our country, and has been for decades. Rice is a good source of protein and staple throughout the world; although it is not a complete protein. That is why beans and rice are a perfect meal. A dish like this with seafood, or the chicken sausage all work as well.

I grew up eating rice, and as a poverty level income household it was common for us to consume rice combined with other ingredients for many meals on a weekly basis. 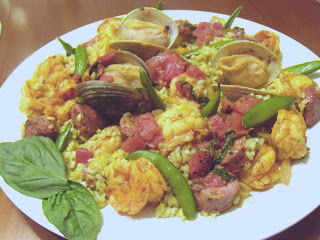 'Everything was seasoned separately, and then combined in a pan to place and bake in the oven...'

Paella- According to The Paella Company, Paella was originally a laborers' meal, cooked over an open fire in the fields and eaten directly from the pan using wooden spoons around the Mediterranean countries. Seafood is rare in the fields of Valencia where this dish began, which is why they used chicken, rabbit, duck and snails.

Snails were the most commonly used meat as they were cheap. For special occasions rabbit or duck would be added and the well-off would have chicken. Anyone that tries to tell you that the original paella was a seafood dish is wrong.

A friend Chef Joseph, who ran a 'Spanish' restaurant in Dallas, Rouge, and who grew up in Basque...situated between Spain and France, used to talk about how it was common to see local paella stands along the beach in his country. As he grew up seafood was introduced into this dish and it became a posh creation. I can just visualize the large pits with open fires under a covered stand, and the beach combers coming up and enjoying some good food on the spot.

My paella is inspired by the fact that I wanted to create something I have not written about as of late, and as most of you know I am big on fusion and playing with ingredients. What a better way than to bring two countries together in this manner.

Saffron eventually founds its way into this dish and was added to produce a yellow and subtle flavor for the main ingredient of assorted meats and then seafood; it did not contain the ingredients of heat as I have created. My seasoning- lemon grass, cilantro, basil, chili paste, onions, garlic, chopped tomato. The bamboo rice was par-cooked separately in a pan with only vegetable stock. No salt. No pepper, and then all combined, and placed in oven to meld flavors and to cook seafood and clams. I sauted the chicken sun-dried tomato sausage with onions and added to the clams and colossal shrimp for flavor. 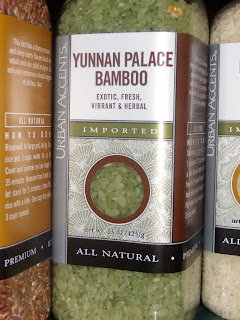 Another Note: Yunnanese dishes are quite spicy, mushrooms feature prominently, and another important characteristic of Yunnan cuisine is the wide use of flowers as food. 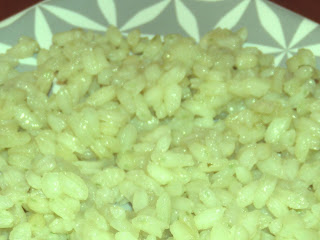 EDUCATION: Bamboo rice is not a specific varietal of rice, but is rather short-grained white rice which has been treated with the juice of young bamboo plants. While milling the rice, the chlorophyll from the bamboo is added. This process causes the rice to be high in vitamin B, and gives it a flavor and aroma much like that of a jasmine green tea. It is eaten frequently in major ethnic groups of Yunnan such as the Dai; which are part of the 38% of the province's minority population.

A striking pale green, bamboo rice is not technically considered sushi rice, but is sometimes used for sushi to lend color to sushi rolls (after it is cooked, bamboo rice is usually moist and sticky). Bamboo rice should not be cooked like regular sushi rice. Rice should then be cooked as usual, but allowed to sit for 20 minutes after cooking.

Most research recommends Bamboo rice to be served as Sushi rice, or as an Asian-style risotto. Using it as a side dish when you want to add a striking note of color to a meal; this is what I am striving for. Some Asian markets carry bamboo rice, and it can also be ordered from mail-order food catalogs or specialty food stores. This product is all natural, and is imported from China. The cost for this exotic ingredient can range from $6 to 10 a pound.

Bamboo shoots (takenoko), mushrooms and a strong vegetarian stock would be a good combination with the contrasting color of a fish such as salmon, or the pink of shrimp after it has cooked. The shoots (new culms that come out of the ground) of bamboo are edible. They are used in numerous Asian dishes and broths. They are available in most Asian supermarkets.

E's NOTE: I found that when I cooked the rice I used a low temperature once it began boiling. Covered it and left it alone. Even after it baked with a while longer I still did not see a sticky or gooey consistency. I feel this rice could still be cooled and forked in a similar way to regular rice with only a small amount of starch. Actually it first reminded me of a barley texture.

I can see this rice replaced for most white or brown rice recipes, and cooking applications. It also though can really work well as a risotto (if you stir it, and add stock as you go to bring out the starch). 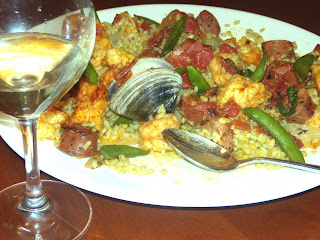 'We opened a nice, 2008, South African Chenin Blanc, and I must say it went well, and the whole meal was very filling and tasty...'

My next post will be 'Ume Rice Pudding', and then the 'Indian Market Tour' with the New Jersey Bloggers...
Posted by Chef E at Tuesday, March 24, 2009