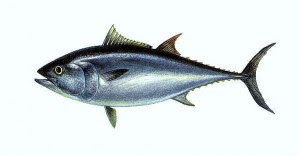 
This information is based on facts, a dinner, and lessons learned and are here presented to you, hopefully, in an entertaining and educational way -Chef E

Kindai Fish Species- Sustainably raised in Japan- Kindai maguro/Kindai tuna stands for Kuromaguro tuna entirely fed by humans, states my friend Robert Gilles @ Shizuoka Gourmet. I had noticed he wrote about the cloned embryos hatched and raised in ocean cages off the Japanese coast, a solution we have yet begun to grasp in our country to help with over fishing, polluted waters, and millions of hungry fellow human beings around the world.

I reached out to Robert and shared with him that I was attending a Kindai Dinner at a local restaurant, Elements, here in Princeton, New Jersey- an event to highlight and raise awareness of Kindai Tuna and other cutting edge fish farmed with sustainability with the wild population in mind- . A big 'Thank You' goes out to Robert for pre-educating me on this matter, and he has since written a new post to address my comments- Tuna Species: Kindai tuna/Kindai Maguro. He also made a comment that I find to be important enough to share, "It is also a very important issue to me to. The more because Japan is being unfairly accused of all kind of evils when it comes to fishing! This is the single country most active in marine preservation development and research"!

What I want to inject now is that Robert @ Shizuoka Gourmet introduced me to something new by way of his sharing what goes on around him in Japan, and now I would like to share how it was brought to my door step by way of Scott Anderson, Executive Chef of Elements Restaurant. If you follow my blog I had already made one visit to the restaurant, and due to a mysterious disappearance of a pint of cream, an over worked cook, hungry lover, a plot thickened into a saucy tale-'Elements'...What Son?. A few friends since then have given me mixed reviews about their restaurant experience at Elements, but I will not go into minor mishaps and still feel then and after last night that we would return for future events, and see what new things Scott and the staff have added. 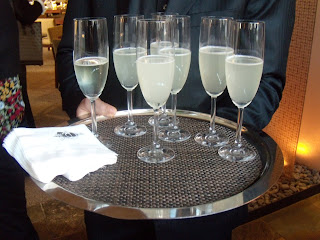 As you arrived, park, and enter through the glass door that bares a familiar initial 'E', a moderately filled area around the bar was buzzing with diners. Wait staff quickly greeted you with a tray of fluted sparkling sake that was nice and refreshing, not too dry, sweet, but just right to start the evening. The hostess was asked what the schedule was. Diners were informed a six thirty to seven'ish reception time was to be expected. Soon modern shaped plates of three or four appetizers began to circle the room. Kobe Tartare stuffed Shishito peppers (favorite), Foie gras torchon, Caviar and Tator Tots, as well as Peterson's Charcuterie of the evening on crostini to name a few. 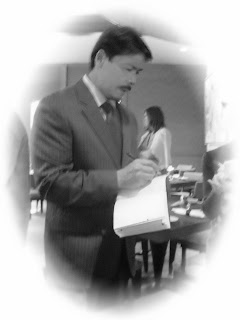 The crowd began to displace to the dining room as one might guess many were ready to sit and relax after a long work day. Time actually slipped by as you can occupy your time people watching. Nick Sakagami was being interviewed by a familiar face from the original Iron Chef Food Network show, a local Today Show guest was encircled by friends who recognized him as they came in, the kitchen staff was full of extras from a local sushi restaurant, Shumi in Somerville, NJ, and well it was just an interesting crowd all around. 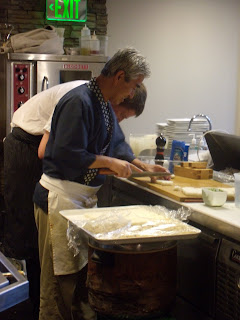 Eventually all seated, Chef Anderson enters the room and introduces the key parties in pulling off this unique dining experience, and hence the wait staff begin their quest to serve the crowd. 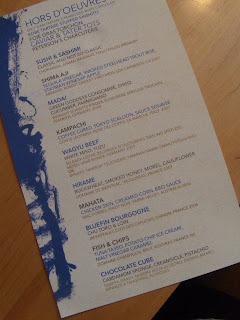 Chef Anderson was found to be equally approachable as I did the other stars of the night, so in my true form I chatted away. He has said yes to discussing to a group of inner-city culinary students coming into the restaurant for a tour and a talk from him and the staff. This would be a great opportunity to introduce young men and women to what I find to be the perfectly flowing kitchen and restaurant design in my career. The talent should be shared, so that a star in my class would also have the opportunity to shine one day. 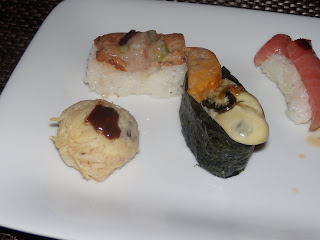 Dinner finally begins to appear slowly but surely. A plate of Sushi and Sushimi are placed in front of each diner, Classic and Not So Classic the menu reads. Feeling there was a key element missing from this dish, several pieces of sushi were lifted to see if a hidden sauce was present once bites were taken. Fish may shine on its own at times, but possibly a little dehydrated soy-miso-hoisen sauce might have gave it a little more kick. Each dish had an addition of libation pairings to go along, and the Chokaisan, Junmai Daiginjo, Tenju Shuzo Brewery Sake was a perfect match. 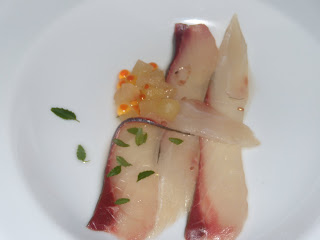 The second through the fourth course slowly arrive as most of the room seem to patiently sit, conversing, having wine or cocktails that may or may not be paired with the courses. We dine on dishes of Shima Aji that had tequila vinegar, smoked maple steel head trout roe along side tiny cubed Stayman Winesap apples... 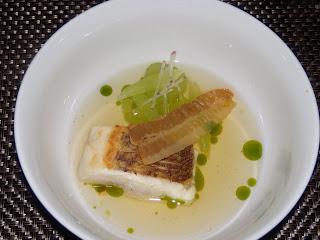 Madai in green goddess consomme with cucumber and parmigiano, Kampachi that is coffee cured along with Tokyo scallion that seemed seared and oh so yummy! 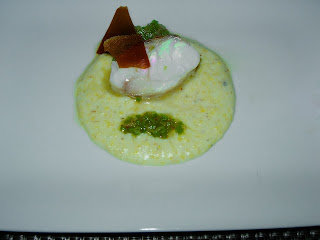 After that fifth course we were served in a more timely manner than our last five dishes, and I have to mention that Chef Anderson is from Florida, so like me I found out he likes his chicken skin. He created a dish of Mahata that was wrapped and cooked in chicken skin to absorb some of its flavor, and set atop creamed corn with a piece of dehydrated BBQ sauce off the corner. The taste was very nice I might add. 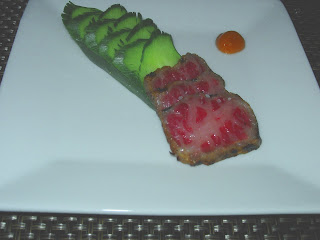 Then one of my favorite dishes of the night was sat in front of me, the Wagyu Beef ('Wa' means Japanese and 'gyu' means cattle), with white miso and yuzu reduction. Lets just say the beef with its natural flavor and marbling literally melted in your mouth. 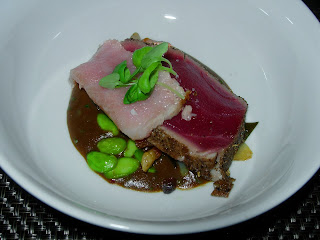 The Bluefin (loin) Bourgogne (as in the waiters words) "What the meal was all about" was placed in front of us. The dish like most was a bowl of color (carrots), contrast (crunch of edamame and silky pearl onions), and the ever so present thick slice of loin on top of the bourgogne sauce made from a short rib base with an offset corner piece of Otoro artistically placed on the loin.

The final two courses were Fish & Chips and Chocolate Cube with cardamom sponge (looked like sponge, but it was a cake) along with a creamsicle side and crushed pistachio. The fish and chips were fun as you tasted the thinly sliced tuna tasso with the potato chip ice cream's silky smoothness and crunchy bite, and off to the corner was the cute little dab of malt vinegar caramel. This was a great ending to the wonderful education. 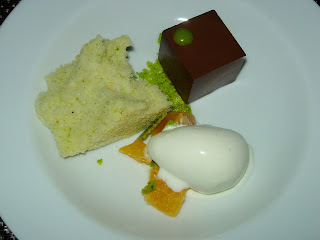 What Scott along with Nick Sakagami did was introduce a full house of diners to the concepts and flavors of Japanese cutting edge fish breeding by way of the Kindai Tuna (listed on Elements website), as well as new Kindai species that have not been served in the United States as of yet. He presented nine of the ten courses with grace and skill that showed off each component of the fish. I know if he is reading this (I found out he read my last piece) then I would like to share that for your first event of this proportion your team in the back and front pulled it off without the diners knowledge of any problems. We might have waited a little too long for some of the first courses, needed a few added touches here and there to the plates, but it was all worth the time and effort for the public to learn a few lessons in quality. 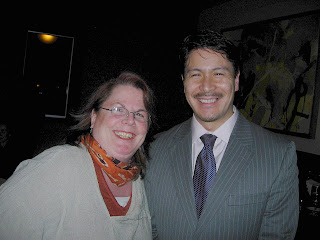 Nick Sakagami and I had a chance to chat after the dinner came to a close, and he touched on a note I try to emphasize in my post; fish in his country of origin is treated with respect and delicacy; once introduced to the palate it must be in perfect harmony with its surroundings, preparation, and plating to be truly appreciated. I look forward to seeing what other fantastic species of Japanese fish Nick Sakagami brings to our table!

Nick Sakagami, born and raised in Japan until he came to the US to attend University of Southern California and now works for a sushi grade seafood wholesaler (Ocean Fresh Fish and Seafood Marketing, Inc) spent most of the evening going from table to table giving each diner his time speaking about the fish and the Universities farm program, and how after 32 years of research by dedicated and talented researchers opportunities such as this night were possible, as well as answering questions. I want to personally thank Nick from my heart for introducing our country to one of my favorites, White Tuna. 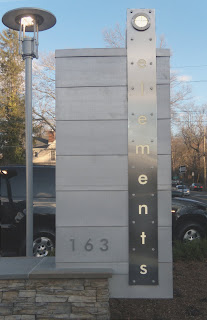 
Check out a blog couple I met last night- He helped with the dinner while she watched from the chefs tables along side the kitchen... Alexander Talbot & Aki Kamozawa